Edit
"Pepper" redirects here. For other uses, see Chilli.
This article is for any pepper that contains no capsaicin. For "Bell pepper", see Sweet pepper 'Bell'

Sweet pepper is a cultivar group of the species Capsicum annuum. Cultivars of the plant produce Vegetable in different colors, including red, yellow and orange. The Vegetable is also frequently consumed in its unripe form, when the Vegetable is still green. Peppers are native to Mexico, Central America and northern South America. Pepper seeds were later carried to Spain in 1493 and from there spread to other European, African and Asian countries. Today, Mexico remains one of the major pepper producers in the world.

Add a general-purpose fertiliser before planting.

Grow in 23cm (9in) pots filled with compost or in grow bags with a maximum of 3 per bag.

Raise seedlings under glass at 15-21°C (60-70°F). Sow two seeds in a compost-filled peat pot - remove the weaker seedling once they have both emerged.[2] Plants may need to be re-potted in several stages before transplanting.

Harden plants off outdoors before transplanting.

Cover soil with a cloche two weeks before planting to warm the soil.

Upturn pots and retain the root ball. Transplant into pre-made holes the size of the pots and cover and firm the roots with soil. Leave 48cm (18in) between plants. Cover with cloches.

Mist plants to keep down red spider mite and encourage Vegetable to set.

Do not pinch out the growing tip as with cordon tomatoes.

Pick as required. Chillies will usually change colour as they ripen. The longer they are left on the plant, the hotter they tend to become. 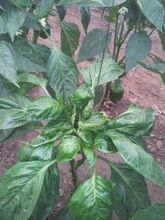 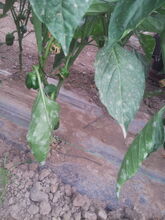