Symptoms can depend on the plant infected and the mechanism of infection. Common symptoms include water-soaked spots on fruits, stems, or leaves, petioles with altered morphology. The watery spots enlarge and develop a cottony white mass that converts the plant to a slimy, wet mass that produces abundant sclerotia. Symptoms appear like Pythium, but occur in dry weather.

In some plants, the symptoms are described as dry. The plant develops brown lesions that coalesce and circle the plant. Everything above the lesion wilts and dies.

The first visible symptom is the wilting and yellowing of the foliage, most likely during dry weather. If the weather is wetter the foliage may not wilt, but the plant will become loose in the soil. Under the soil a white, fluffy fungus grows on the base of and invades the bulb. Later this mould becomes covered in small, round, black structures.[2]

If attacks are seen in the garden, water healthy plants with Cheshunt Compound after removing diseased plants immediately.

There are some fungi that are parasitic on Sclerotinia and that can be used to control it. The most effective of these is Coniothyrium minitans, but none have been turned into a practical treatment.

Chemical control can include soil fumigation, which is considered an effective control method. Some fungicides, including benomyl, are effective in some crops, but not all.

Good cultural practices are necessary to avoid attacks such as taking care to avoid planting susceptible crops in poorly drained soils, low planting densities and weeding between crop rows. Infected fields should be planted with non-susceptible crops, such as cereals for at least three years.

Potential hosts of sclerotinia rot include: 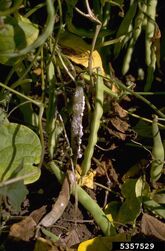