In general, D. destructor is of extremely minor importance as a pest of potatoes in the EPPO region. Problems only occur at temperatures of 15-20°C and at relative humidity above 90%.[3]

The nematode enters potato tubers through lenticels.[4] There are, in general, no obvious symptoms in the aerial parts of the plant, although heavily infested tubers give rise to weak plants which usually die. Early infections cause small white mealy spots just below the surface that are only visible if the skin is removed.[4] These later enlarge, darken, are woolly in texture and may be slightly hollow at the centre. On badly affected tubers there are typically slightly sunken areas with cracked and wrinkled skin which is detached in places from the underlying flesh. The flesh has a dry and mealy appearance, varying in colour from greyish to dark brown or black. This discoloration is largely due to secondary invasion of fungi, bacteria[4] and free-living nematodes (the latter are easily confused with D. destructor).[3]

Control by crop rotation is possible using non-host crops such as sugarbeet[5], but it is important to control weeds carefully because of the polyphagous habit of D. destructor. The use of nematode-free seed potatoes is an essential component of any control programme.

Treatment with soil-applied nematicides can provide a high level of control but can be expensive. Granulated nematicides such as carbofuran were reported to be effective against the nematode.[6][7] D. destructor has apparently been eradicated from the state of Wisconsin, USA, by means of repeated fumigation with ethylene dibromide, combined with official restriction of movement of infected tubers.[8] Seed dressing of garlic prior to planting with thiram or benomyl wettable powder gave very good control.[9] 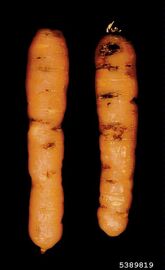