If you disagree with this suggestion, please explain why at Talk:Potato blight or improve the page and remove the {{separate|<<...>>}} tag.

Remember to check what links here and the page history before separating.

This article is for potato blight. For other uses, see Blight (disambiguation)

Potato blight may refer to either late blight (Phytophthora infestans) or early blight (Alternaria solani). Both of these blights cause serious potato disease. The organisms can also infect tomatoes and some other members of the solanaceae family.[1]

The early stages of blight are easily missed, and not all plants are affected at once. Symptoms include the appearance of dark blotches on leaf tips and plant stems. White mould will appear under the leaves in humid conditions and the whole plant may quickly collapse. Infected tubers develop grey or dark patches that are reddish brown beneath the skin, and quickly decay to a foul-smelling mush caused by the infestation of secondary soft bacterial rots. Seemingly healthy tubers may rot later when in store.

Observing a blight-watch system can forecast the spread of blight in your area. In the event of a predicted blight infestation, the use of fungicides can reduce the risks. Some varieties of potato are blight resistant or slow to develop the disease. Earthing up can also reduce the infection of tubers as the disease has to travel further through the soil to get to them. 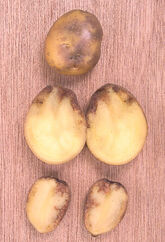