The potato is a starchy, tuberous crop from the perennial Solanum tuberosum of the Solanaceae family (also known as the nightshades). The word potato may refer to the plant itself as well as the edible tuber. Potatoes are the world's fourth largest food crop, following rice, wheat, and maize.

Potatoes are a useful crop to grow on weed covered ground. After the haulms have grown they will shade the ground under them in a dense leaf cover. After growing, earthing-up, lifting the crop and manuring the soil will be in a good condition for growing crops the following year.

Chitting is a method of preparing seed potatoes. Around six weeks before planting, lay your potatoes out in a warm, light (but not too sunny) location with the rose end (the end with most eyes on) upwards. By the time you are ready to plant the tubers should have grown small, dense clumps of chits. If these are too long then they have not had enough light on them. For larger potatoes rub off excess chits to leave just one or two, for smaller potatoes leave many of the chits on. This process is vital for early potatoes and can prove useful for maincrops.

Choose a site where potatoes have not been grown for at least two years or you risk the crop suffering from various troubles left behind by the last season's such as blight. Add well rotted horse manure to the bed a month before and either work it in with a fork or cover it and allow the worms to do the digging for you. Manure will help to acidify the soil which will reduce the chance of your potatoes suffering from scab. Do not lime as this will act against the manure and avoid nitrogen fertilisers as this will promote too much leafy growth and not enough energy will go into the tubers.

To plant under polythene, first plant your seed potatoes as above, scatter slug pellets over the row and then cover in black plastic, pushing the plastic into the soil on either side with a spade. Planting under polythene has several benefits to it, it keeps the soil warmer and moister and suppresses weeds. The disadvantages, however, include the cost of the plastic and the damage slugs can cause.

Once the emerging haulms begin to press against the polythene; cut a slit above each one and gently pull the shoots through.

Potatoes can be sown in specially designed sacks or any other 30cm (12in) wide container, which is the space needed for each potato therefore only one could be sown in a container this size. The container is filled with 10cm (4in) of soil or compost, the potatoes planted chit-side up and another 10cm (4in) of soil used to cover them. The sides of the container should now be rolled down to just above the soil line (if using bags) to provide light to the shoots when they emerge. Water the potatoes at this point.

Once the shoots have emerged and reached 15cm (6in) above the soil line, add another 10cm (4in) of soil so that only the top 5cm (2in) is visible. Repeat this process until the shoots reach the top of the container.

If there is a danger of frost once the first shoots have emerged, draw a little soil over them for protection

This process can be done a little at a time, or all at once. The process is to draw soil from between the rows and create a ridge through-which the stems will grow. If this is done a little at a time there is a risk that the shoots will emerge from either side of the ridge if it is created too high or too soon. To do this in one go, wait for the stems to grow to 20cm (9in) high, and then draw the soil against the plants.

This process causes the potatoes to produce more tubers. It has the added benefit of ensuring that tubers are not exposed to light, which will cause them to form chlorophyll, which turns the exposed parts of the tuber green, and solanine which is highly toxic. There is no evidence to suggest either earthing up all at once or gradually produces better or worse results.

Over watering potatoes can cause them to rot underground. It is best to leave them to their own devices. However, during a particularly dry period it may be necessary to give them some water, in which case it is advisable to give them a good drenching so that the water can get deep, rather than watering little-and-often which may make the potatoes too moist for too long, or may just evaporate in the sun. This is particularly important once the tubers have started to form.

Once ready, potatoes can be lifted using a garden fork or ideally a potato fork. It is important to avoid damaging the tubers during this process so dig the fork into the trench to the side of the plants and gently lever the soil up to expose the potatoes. It is important to thoroughly turn the row over and uncover all tubers to avoid complications when using the site again.

Once the flowers have dropped from the foliage, carefully remove the soil from a part of the ridge and inspect the existing tubers. They are ready to lift as new potatoes once they are the size of a hen's egg.

Wait until the haulms have turned brown cut the stems off and wait 10 days before lifting.

Leave maincrop tubers in the sun for several hours after lifting to produce a dry skin that will protect them during storage. Keep them in a wooden or cardboard box in a cool, but frost-free location to preserve them until Spring. 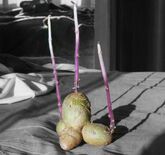