Potassium deficiency influences plant water regulation by affecting cell turgor and the opening and closing of stomata.[1] It is most common on light, sandy soils, as well as chalky or peaty soils with a low clay content. It is also found on heavy clays with a poor structure.

Plants require potassium ions for protein synthesis and for the opening and closing of stomata, which is regulated by proton pumps to make surrounding guard cells either turgid or flaccid. A deficiency of potassium ions can impair a plant's ability to maintain these processes.

Deficient plants may be more prone to frost damage and disease, and their symptoms can often be confused with wind scorch or drought.

As potassium is mobile in the plant, it moves to the younger leaves when supplies are short. Although the growth of deficient plants may not be seriously impaired, the yield and quality of fruit are often greatly reduced. Deficient crops are prone to wilting.[1]

Potassium deficiency causes yellowing and scorching of older leaves. These symptoms begin at the margins of the leaf and spread between the veins towards its centre. Large areas of tissue around the major veins remain green until the disorder is well advanced. A brown scorch develops in the yellow areas and spreads until the leaf is dry and papery. As each leaf dies, others further up the plant develop the same symptoms. These symptoms can develop rapidly in hot weather. Fruit may not expand fully at the stem end, although they look swollen at the tip end, a symptom that is also caused by water stress.[1]

Potassium from a fertiliser side-dressing will move from the soil surface to the roots only if the soil is very sandy. A soil test can be used to determine the rate needed. Fertigation or drip feeding can also be used to treat a deficient crop. Foliar sprays are less effective and can burn leaves.[1]

Prevention and cure can be achieved in the shorter term by feeding with home-made comfrey liquid, adding seaweed meal, composted bracken or other organic potassium-rich fertilisers. In the longer term the soil structure should be improved by adding plenty of well rotted compost or manure. Wood ash has high potassium content, but should be composted first as it is in a highly soluble form. Common forms of inorganic fertilizers include: Potassium Nitrate, Potassium Sulfate, and Monopotassium Phosphate. 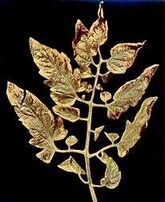