A pea is most commonly the small spherical seed or the seed-pod of the legume Pisum sativum'. Each pod contains several peas. The name is also used to describe other edible seeds from the Fabaceae family such as the pigeon pea (Cajanus cajan), the cowpea (Vigna unguiculata), and the seeds from several species of Lathyrus. Peas will grow on most soils, although they prefer a medium well-dug soil with plenty of organic material. Do not add nitrogen to the soil before planting (or after) - peas extract nitrogen from the air sufficient for their needs. An over-rich soil will cause lots of leafy growth, but a reduced crop of peas. Peas like moisture, so do not plant too near walls or fences.

A sunny area is best, although peas are tolerant of partial shade, especially if the shade occurs during the hottest part of the day. Maincrop peas are tall leggy plants 180cm (6ft), and they can easily be damaged if planted in areas exposed to high wind.

Remember that the taller varieties will cast quite a shadow over any other crops nearby. A good plan is to use the space around the pea plants for smaller shade-tolerant plants vegetables - radishes are an excellent choice.

Prepare the soil in December to allow it to settle. Dig to at least a spade's depth (the roots of peas like to grow deeply), incorporating as much organic material as possible. Peat (or peat substitute) is fine because peas 'fix' nitrogen into their roots from the air and have little need for a nitrogen rich soil. Add a handful of bonemeal (two if the soil is poor) per square metre, and incorporate it into the top soil.

An alternative to cloche protection is to sow the seeds in late February on a windowsill - if this is done, use peat pots (not plastic), because the seedlings can then be planted directly into the soil with the peat pot (the peat will quickly break down in the soil) - peas do not like their roots being disturbed. Remember to harden off the seedlings prior to planting permanently.

Prepare a shallow drill using a trowel, and sow the seed 2.5cm (1in) deep - where more than one row is being sown, the distance apart should equal the eventual height of the plants. Sow the seeds singly at 5cm (2in) intervals - the germination rate is high and over-crowding will affect the health of the plants. One method of increasing the success rate is to soak the pea seeds in water for 4 hours before planting. When planted, water well if the conditions are at all dry. The seedlings should appear in approximately 15 days time.

Another technique is to cut a length of guttering to the size of the intended row, fill with potting compost and sow the pea seeds in the gutter as described above. Once the seeds have germinated and are ready for transplanting; dig a small trench the depth and width of the guttering and slide the germinated peas and soil into the trench. Once in place water liberally. This technique is useful for mass-transplanting, however, peas do need deep roots, so it is advisable to transplant them as soon as possible.

The first key need of peas is moisture, and they must be watered throughout their lives when conditions become dry. If the soil has been well-prepared they will have no further need for feeding. A mulch of organic material around the plants will help to keep weeds at bay and preserve moisture.

Virtually all pea plants will require support of some kind, consult the seed packet to find out their final height. The easiest method of support is to place twigs near the plants - the tendrils of the plant will twine around the twigs for support. Thinnings from conifers are ideal. Another method is to erect canes in a row, tying in the plants as they grow - netting to the canes will give extra support. The diagram on the right shows a row of canes secured together with twine at the top. Each plant is grown up its own individual cane and can then spread across the netting.

Garden peas are best when slightly immature - when fully mature they become hard and loose the sweet taste. Harvesting them early also encourages them to produce more. As a guide, peas are normally ready for harvest three weeks after flowering. Peas quickly loose their flavour after harvesting, so pick them just before they are required for cooking.

The peas at the bottom of the plant will tend to be ready first, so begin harvesting here, working up as time progresses. When the plant stops producing peas, cut the top of the plant off and leave the roots in the ground to compost for next year. 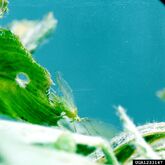