Marrows are a part of the gourd section of the cucumber family (cucurbitaceae, more commonly known as cucurbit), which includes courgettes, squash and pumpkin. Easy to grow, marrow are the sort of vegetable that inspire children to take an interest in gardening. Due to their spongy flesh, poorly cooked marrow can become soggy and unappetising, for this reason they have fallen out of favour to the sweeter, easier to cook courgette. None-the-less they remain a well-known allotment addition in Britain.

Choose a sunny spot with 90cm (35in) of space in every direction. They will also grow in containers or one or two plants per growbag if required.

Marrow are heavy feeders and will benefit from having plenty of compost dug into the soil prior to planting.

Marrow are easily grown from seed and can be sown in their final position in late May/early June or alternatively sow indoors from mid-April. Sow two or three seeds 2.5 (1in) deep and cover with cloches if outdoors. Leave cover in place for as long as possible before thinning the seedlings to leave the strongest one.

If you don't have space to raise Marrow indoors; seedlings can be bought from garden centres and are ready to plant outdoors as soon as the risk of frost has passed. Ensure plants are hardened off for 2 weeks before planting out by placing them outside during the day and keeping them indoors/under cover at night. Dig a hole slightly larger than the container the seedling is in, tip it out and plant into the hole slightly lower than its original compost level. Mound soil/compost around the stem to support it. Water thoroughly to settle the roots.

Keep plants well watered especially once fruit begin to form. A healthy marrow plant will consume up to 10 litres of water a week. A layer of compost or polythene around the plants will help to suppress weeds and retain moisture. Provide a high potassium liquid fertiliser once or twice a fortnight.

Marrow require pollination for fruit to form successfully. Insect pollination can be poor, in which case take a male flower, fold back the petals to reveal the pollen on the stamen, and insert it into the female flower. Females can be differentiated from the males as they have a tiny unfertilised fruit behind the flower head.

Harvest marrows when they are 20-25cm (8-10in) long. Push your thumb into the fruit near the stalk - if it goes in quite easily then it is at the right stage for summer picking. Regular picking will ensure a long cropping season. The flowers of the courgette are also edible, they are commonly left attached to the fruit, covered in batter and deep fried. The flowers do not keep as well as the fruit so are rarely found in supermarkets.

Allow the fruit to mature on the plant and remove before the first frosts. Store them in a cool room indoors and they should keep until Christmas. 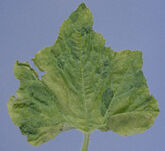