Fusarium wilt (Fusarium oxysporum & other Fusarium spp.) is a soil-inhabiting fungal pathogen, which will infect many varieties of plants at soil temperatures above 24° C (75° F).[1]

The fungus attacks the xylem in the stem, blocking water uptake and leading to a characteristic sudden leaf wilt that does not respond to watering.

Infestation often occurs on medium-aged or older plants. It begins as a yellowing and wilting of the lower leaves. The infection progresses up the plant until the entire plant turns yellow. Plants become stunted when infected at a younger age.

To be sure that the plant is infected by Fusarium wilt, make a lengthwise cut on the stem at the soil line, near the base. The cut has a dark-brownish vascular tissue starting about .03cm below the bark. Or you pull an infected plant, and the roots are partially or totally reddish-brown in color.[2]

Early symptoms include yellowing between the veins of younger leaves which become chlorotic, wilt, dry and hang on the stem which eventually dies. Other foliar symptoms include leaf rolling, rosetting and purpling. On occasion, tubers may form at the leaf axils. Internally, the pith of stems is discoloured at the nodes and vascular tissues become deep brown. Leaf discoloration and wilting are often confined to one side of the stem or to stems on one side of the plant. In other forms of fusarium wilt, the root system rots away and the lower and under ground parts of the stem turn black, dry and develop a shredded appearance. This is accompanied by yellowing and wilting of the foliage.[3] Tuber symptoms may vary with Fusarium species and potato cultivar. In the more severe forms of the disease, tubers become sunken at the stolon-end with necrotic tissue extending into the tuber. Slight to severe browning can develop in the vascular ring. On occasion, a light brown discoloration can occur in tissue on either side of the vascular ring but the tissue itself remains firm. Blemishes may also develop over the surface of the tuber especially around the eyes. In milder forms of the disease, vascular darkening is absent and tuber infection follows wounding.[3]

Infestation often occurs on mature plants after flowering and at the beginning of fruit set. The initial symptom is the yellowing on the lower leaves and a slight wilting on the infected shoots. Yellowing begins to appear on one side of a leaf and then all leaflets become yellow on the other half of the leaf. As the disease progresses, one side of the plant wilts and this process spreads to the other side as the infection worsens. An infected plant often dies before maturing.[2]

There is no known effective method to control fusarium wilt.[2] Remove and burn affected plants.[4]

Grow wilt-resistant varieties.[4] Do not compost. Practice a proper crop rotation strategy. If soil is known to be infected do not plant solanaceous or other susceptible crops. 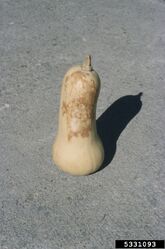