Edit
This article is for R. solanacearum. For other uses, see Brown rot (disambiguation)

Brown rot (Ralstonia solanacearum), also known as bacterial wilt and southern bacterial wilt, is a plant pathogenic soil bacterium. It colonises the xylem, causing a bacterial wilt in a very wide range of potential host plants. It is known as Granville wilt when it occurs in tobacco.

The following species may act as hosts for R. solanacearum:

Foliage symptoms include rapid wilting of leaves and stems, usually first visible at the warmest time of day. Eventually, plants fail to recover, become yellow and brown necrotic and die. As the disease develops, a streaky brown discoloration of the stem may be observed on stems above the soil line, and the leaves may have a bronze tint. Downward curling of the petioles may occur. A white, slimy mass of bacteria exudes from vascular bundles, when broken or cut. This slime oozes spontaneously from the cut surface of a potato stem in the form of threads, when suspended in water. Such threads are not formed by other bacterial pathogens of potato. This test is of presumptive diagnostic value in the field. Under cool growing conditions, wilting and other foliar symptoms may not occur. On tubers, external symptoms may or may not be visible, depending on the state of development of the disease. R. solanacearum can be distinguished by the bacterial ooze that often emerges from the eyes and stolon-end attachment of infected tubers. Soil may adhere to the tubers at the eyes. Cutting the diseased tuber will reveal a browning and eventual necrosis of the vascular ring and immediately surrounding tissues. A creamy fluid exudate usually appears spontaneously on the vascular ring of the cut surface a few minutes after cutting. In the case of ring rot, the tuber has to be squeezed in order to press out a mass of yellowish macerated vascular tissue and bacterial slime. Atypical symptoms have been described on potato (necrotic spots on the epidermis), possibly caused after lenticel infection. Plants with foliar symptoms caused by R. solanacearum may bear healthy and diseased tubers, while plants that show no signs of the disease may sometimes produce diseased tubers.[1]

The youngest leaves are the first to be affected and have a flaccid appearance, usually at the warmest time of day. Wilting of the whole plant may follow rapidly if environmental conditions are favourable for the pathogen. Under less favourable conditions, the disease develops less rapidly, stunting may occur and large numbers of adventitious roots are produced on the stem. The vascular tissues of the stem show a brown discoloration and, if the stem is cut crosswise, drops of white or yellowish bacterial ooze may be visible.[1]

The control of bacterial wilt has proved to be very difficult, especially for race 1 with its broad host range. Chemical control is nearly impossible to apply. Soil fumigants showed either slight or no effects.[2]

Several resistant cultivars of potato, as well as other crops, are available, but the race and strain diversity of the pathogen make it difficult to utilize these in different countries. Intercropping of potato with maize or french bean reduced inoculum density and disease development in some cases[3], but microlesions were also found in these hosts, where R. solanacearum could persist.[4] Cutting seed potato tubers should be avoided; cutting can increase disease incidence by 2.5 times and yield loss by >40%.[5] Crop rotation of 5-7 years without susceptible crops has been recommended. The disease may also be controlled by application of fertilizers to change soil pH. Host debris, latent infected tubers and deeper soil layers were found most important for survival.[6] 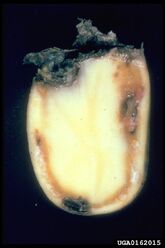 Brown rot can be confused with:[1]