Anthracnose and Canker are general terms for a large number of different plant diseases, characterised by broadly similar symptoms including the appearance of small areas of dead tissue, which grow slowly, often over a period of years. Some are of only minor consequence, but others are ultimately lethal. Different cankers and anthracnoses are caused by a wide range of organisms, including fungi, bacteria, mycoplasmas and viruses. This does not usually render the roots inedible. It can be caused by several factors - Soil acidity, presence of fresh organic matter in the soil, root damage and irregular rainfall.

Symptoms are most visible on leaves and ripe fruits. First appears on leaves as small and irregular yellow, brown, dark-brown, or black spots which may expand to cover the whole affected area. Infections darken with age. Can also cause severe defoliation and rotting of fruit and roots. Infected fruit has small, watersoaked, sunken, circular spots that may increase in size up to 1.2 cm in diameter. As it ages, the center of an older spot becomes blackish and emits gelatinous pink spore masses.[1]

Some cankers are treatable with fungicides or bactericides, but many are not; often the only treatment available is to destroy the infected plant to prevent the disease from spreading to other plants.

This can be avoided by liming the soil, growing a resistant variety or growing in a sterile soil/compost/sand mixture in deep containers. This is usually the preferred choice for exhibition growers who require long, clean roots. 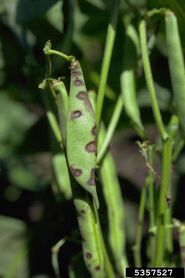 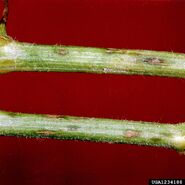 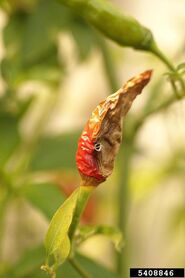